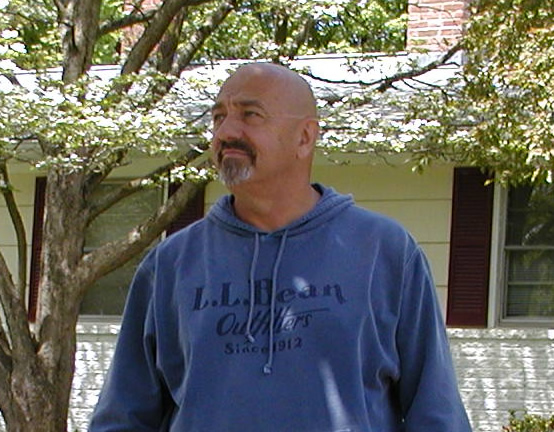 You may have heard of his work uniting families of troubled teens and adolescents.

This is his story, written in an easy to read book. 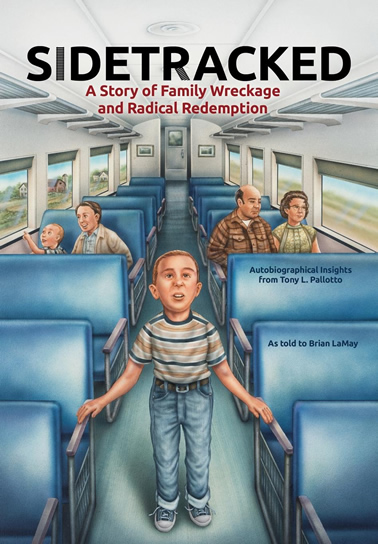 About Sidetracked the Book

Drunken parents. A violently abusive father. Absence of adult supervision and guidance. Those factors in Tony Pallotto’s upbringing produced a calloused heart and reckless disregard for himself and others.

He could’ve killed himself. And almost did. He could’ve killed others. And tried. But an overriding spiritual agenda scuttled those outcomes — and dispatched the guy Tony angrily tried to kill as an unlikely personal messenger in a land far from where they’d first locked horns.

Later, as an enlightened young man leading the stable, wholesome family life he’d never previously known, moral compromise and corporate prosperity led him down a self-destructive path similar to the one he’d taken as a teen — one that mimicked the disengaged, dysfunctional parents he’d never wanted to emulate. Finally, when it all came crashing down, Tony was left with nothing but fertile wreckage, combined with newfound humility and bearing. It all led to a redeemed life and purpose that has proved vital to families plagued by the same type of rebellion that once — no, twice — defined Tony.

And, it led to peace and hope that endure — even amid unspeakable family tragedy. These pages unfurl a dynamic saga of car wrecks, dope houses, drug overdoses, death-defying dashes and workplace drama — all of it incidental to a climax that chronicles souls plucked from the fire and fractured families restored.

How the Book Came About

Tony and I (Brian LaMay) became acquainted working at Southcoast Newspapers, shortly after I took a job as a sportswriter in 1990. We worked in different offices but saw each other occasionally. He lost his job to reorganization in 1995.

I lost track of Tony until 1998, when I was referred to an organization called Teen Adolescent Placement Services after inquiring about help for troubled teens. I was surprised when Tony answered the phone. I had no idea about his new career.

The next time I talked to Tony was in 2001. My family and I had moved from Del Mar to Oceanside and were looking for a new church. I stumbled upon a teen Bible study and saw Tony leading the group. We talked afterward and decided to begin meeting together. Next thing I knew, he was discipling me. We went through “Design for Discipleship,” a wonderful curriculum published by The Navigators, a ministry of which he had been a longtime member.

As our friendship blossomed, Tony shared details about his topsy-turvy life. I was amazed at how many amusing, tragic and crazy twists and turns his life had taken. I knew there was an incredibly gripping story there, but it never occurred to me to offer my services as his biographer.

But it eventually occurred to Tony. In 2004, he asked me if I’d write his life story. I agreed. We back-burnered the idea in hopes that our lives would soon settle down a bit.

They didn’t. By 2005, Tony’s ministry was going gangbusters — lots of troubled teens out there — and I was preparing to move to Switzerland. My wife had been offered a great career opportunity. She asked me to pray about quitting my job after 15 years with the newspaper. We prayed, and God said, “Go!”

By fall 2005, I was a stay-at-home dad living in a new land. I had some time to start working on the book, but Tony and I hadn’t jotted anything down. We tried some long-distance phone sessions, but our conversations always wound up sidetracked (there’s that word). We resolved to wait until I had returned to the States.

Even though I wasn’t sure what would wind up in the book, I knew what the book would be about. One day, traveling on a train through Switzerland and Italy in summer 2007, inspiration came calling. It was so strong, I shrugged off the fact that I had no computer. I began penning the preface in longhand on notebook paper.

Six months later, we were back in California. Tony and I began the first of dozens of sessions seated in booths at local restaurants, retracing his life and evaluating content for the book. He began telling stories — some I’d heard before, some I hadn’t. Each time we met, Tony revealed more — and never failed to flabbergast me with accounts that ran the gamut from zany to melodramatic, from striking to surreal.

Some of those stories didn’t make the cut. Others remain with Tony and are unknown to me, after I told him simply to quit sharing them. I had two reasons:

Too many incredible stories might lead readers to the conclusion, “This guy’s making up this stuff.”

Too many stories means too much writing. I’m a sprinter (suited to pecking out news articles and short stories). I was relieved to have finally finished my first marathon — and certainly didn’t want to write an “ultra.”

My laziness notwithstanding, it indeed stretches credulity that a life could be so packed with traumatic drama, sordid soap operettics, slapstick shenanigans and uncanny rendezvous between people with scores to settle and emotions intertwined.

But then, who should expect anything less when Almighty God diverts storylines and circumstances, thereby transcending our efforts to control the show?

God has unlimited buttons to push — and he always pushes the right ones — to keep us from ruining things beyond repair. May He always keep pushing them. 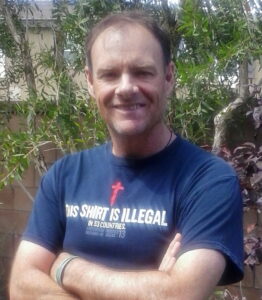 Brian LaMay is an award-winning journalist who has worked as a reporter, editor, freelancer and market researcher. More recently, he has worked as an Internet marketing and search engine optimization specialist. His passions include quality time with his family and street evangelism as a member of Wayside Harvesters, thewaysideharvesters.org. Brian and his wife, Jacqui, have six children. They live in San Diego, CA.